by Frank Hurricane and Hurricanes of Love 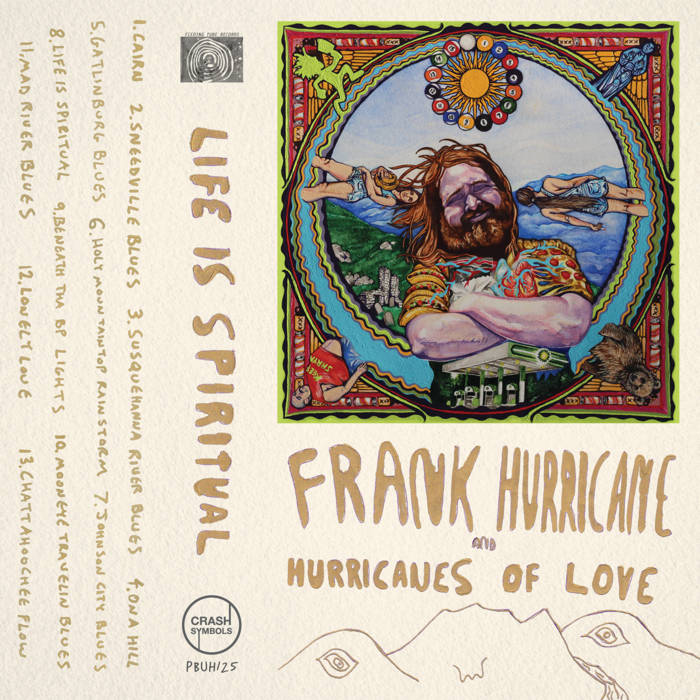 ZRoach one of rock n roll’s most searing and true ANTHEMS sandwiched between a collection of holy spiritual sojourns and bug-eyed escapades. totally essential. Favorite track: Life is Spiritual.

Nerve Salad A classy release. Backwaters, back roads, back woods, back doors, and backtalk. The joke is on you, America... laugh and cry, celebrate and pule. Swampy biographies, when all's said and done, makes for moments of enlightened astonishment. Americana/blues as told from a mud puddle in a truck stop parking lot.

Life is Spiritual is the new full-band record from Frank Hurricane. Here he joins the Hurricanes of Love for an epic spiritual journey into the mountains, rivers, cities, and towns of Appalachia, America, and beyond. The band on this record consists of legendary musicians including Larry Packer from The Band and Sha Na Na, Rene Bailey (one of Louis Armstrong's main female vocalists), and members of the Jackson 5 and Mercury Rev. Get ready to get OFF THA CHAIN!


It’s fair to say that what the world needs now is love. And not just a drop here or there. Enter the Hurricane. This latest offering is a high point in a career that is all about being high and impossible to put a point on.

Life is Spiritual – it’s an evocation, a flowering of a singular vision. There is nothing static in Hurricane’s world, even if he is drawing on more recognizable forms than in the past. He’s mastered the elusive art of being in the moment. His car is a character, the road is his friend, but what stands out the most is the string of places. The places don’t so much define the people in them as they act on their inhabitants spiritually. Like ghosts.

Out of the gate, yeti powder, pills, and spiritual rivers lead him to the corrupt town of Sneedville, TN. We meet Cricket O.G., who warns of weed laced with PCP, and even though a boy falls into a gasoline fire, the Sneedville blues can’t get our Frank down.

“Susquehanna River Blues” spins a yarn about hitting a Burger King with a group of Juggalos and wrings bright beams of profundity out of the experience with the simplest language imaginable. “Gatlinburg Blues” augments its colorful tale with eerie strings sawing away in the background, summoning ineffable drama and on “Holy Mountaintop Rainstorm,” Frank sings against a phalanx of horns. “Johnson City Blues,” with its fascist bovine building a pipeline, is a tale of a haunted devil town, sinners in the hand of an angry god, and the terror of early America that’s never left us. The only peace is to be found in breezes and natural beauty. Frank wails like a banshee.

The title track finds Frank reflecting, distilling not just the album but his worldview into a head-nodding jaunt. “Life is spiritual” becomes an incantation, which Frank and Rene Bailey belt out like a call to the cosmos. “Beneath tha BP Lights” is an ethereal tale of a game of pool, and “Mooneye Travelin Blues” is a lament of the highest order. “Lonely Love” is just what it sounds like, Hurricane style. The road, for all of its adventure, is also a lonely place. “Chattahoochee Flow” takes us out of this LP, but we know Frank’s still rolling on.


"The positivity that spins throughout Life is Spiritual oozes an off-kilter charm . . . Honestly, some of the most open-hearted songwriting I've heard in a long time." -NPR Music

"So where, exactly, are we giong with this? It's a question you can't shake from your mind when you first listen to Frank Hurricane's hazy Appalachian folk album Life is Spiritual. As you attempt to decipher his off-kilter musings, it eventually becomes clear - you just have to let go. This isn't a maddening situation, but rather freeing, actually, as you ride shotgun with Hurricane through his whimsical psychedelic trip. And at times, that can get pretty strange man." -Washington Post

"Frank’s a seer and a singer, a poet laureate of the rusted underbelly of America, rust I often found myself scratched on growing up. He finds transcendence in the asphalt of Tennessee’s most scorched country – giving a reverent Americana profundity to PCP warnings, haunted devil towns, pimpin’, Shrympin (sic), and yeah lonely Juggalos at the local Burger King." -Raven Sings the Blues

"Those who think all contemporary stuff is simply remade-remodeled precedent really need to check out Life Is Spiritual. In the end, there’s no other album like it that’s not made by Frank Hurricane." -The Vinyl District

"...the sonic equivalent of hiking the Appalachian Trail." -Dying For Bad Music

"Brutally yet comically authentic..." -The Attic

"...cool and fun and definitely has both Merriam and Webster doing dusty pirouettes in their graves." -Cassette Gods

"Frank Hurricane goes on some wild adventures, I'm pleased he was willing to share..." -The Newest Rant