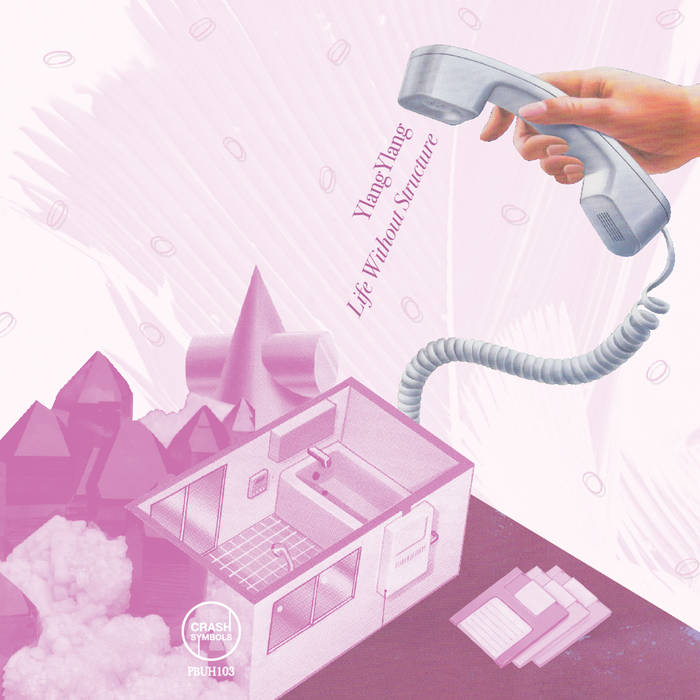 Montréal-based Catherine Debard's new Ylang Ylang cassette is bright but introspective, abstract; atmospheric reveries and 90s tinged (faux) new age pop. Titled 'Life Without Structure,' most of these five tracks are built from carefully cannibalized loops and home-samples, deconstructed and recomposed with spare beats, tidal drones, and bits of oddball punctuation. Despite its poise, 'Life Without Structure' is essentially an album focused on exploring the mechanics of self. In that vein, Debard cites Susan Sontag's I, etcetera: "I honour my cravings, and I lose patience with them." Going beyond musical influences, the album's intellectual backdrop is animated by a variety of ideas, particularly a cadre of 20th century thinkers from R.D. Laing to Krishnamurti interestd in balancing the mystic self against the discipline needed for consciousness. In that way, like so much truly good pop, 'Life Without Structure' is also a prismatic meditation on both social politics and survival. One that succeeds, like so many humans, primarily thanks to its unique sense of balance.

"Montreal-based artist Catherine Debard . . . has a particular affection for music as an experiential medium. To her, it's a melodic liquid capable of transferring memories and thoughts from one person to another in an incredibly intimate manner. It can be less about the concrete structure of each track and more about the emotions behind each tick, whir and electronic transmission. She suggests that these electronic sounds might possess an inherent humanity that allows them to work their roots deep into our subconsciouses without us even realizing it. She's spent the past few years creating a history of releases that speak to this very concept in a real and meaningful way . . . She elicits a certain pop consciousness that retains its hold on you long after the music has grown quiet. It's more than a little miraculous." -Nooga

"There's a spookiness here rooted less in midnight ghouls and more the everyday horror of a trip to the drugstore with a headcold." -Cabin Floor Quarterly

"Fell in love with this tape immediately. Split evenly between propulsive drum machine rhythms and hazy ambience, the album is perfectly sequenced. What I imagine the soundtrack to a hypnotherapy appointment would sound like. Gentle vocals float above washes of synths, the lyrics hinting at self-discovery and ego-critique." -Your Record Collection Sucks

"Somewhat surprisingly, YlangYlang chooses an ambient/new-age pop packaging to wrap her latest offerings up in. However, in Debard's hands 'pop' is reconstituted with minimal beats, washes of drone, and of course her innate strangeness. Maybe slightly more accessible than [her] usual, but just as satisfying as ever." -Ride the Tempo

"When you leave the physical world and are waiting in the relocation lounge for your astral directions, Life Without Structure will be seeping into your awareness. The pleasantries of pop music without all the barbed hooks..." -Lost in a Sea of Sound

"...this is a great record. From the first artful beats and echoing vocals of 'Uncertain Landscapes,' you can tell this sparse set of recordings is going to hit deep and stay there for a while. YlangYlang’s tones wash over the weathered ears of the listener, with a voice that seems half-caring, half-babbling." -Grayowl Point

"You take the abstract with the concrete... one informs the other, everyone’s happy in the end. Debard’s attention to melody, while set adrift in a sea of at-times formless mood, is the key grounding point to Life Without Structure, an anchor holding the listener in place as the sea of tone shifts around them." -Cassette Gods