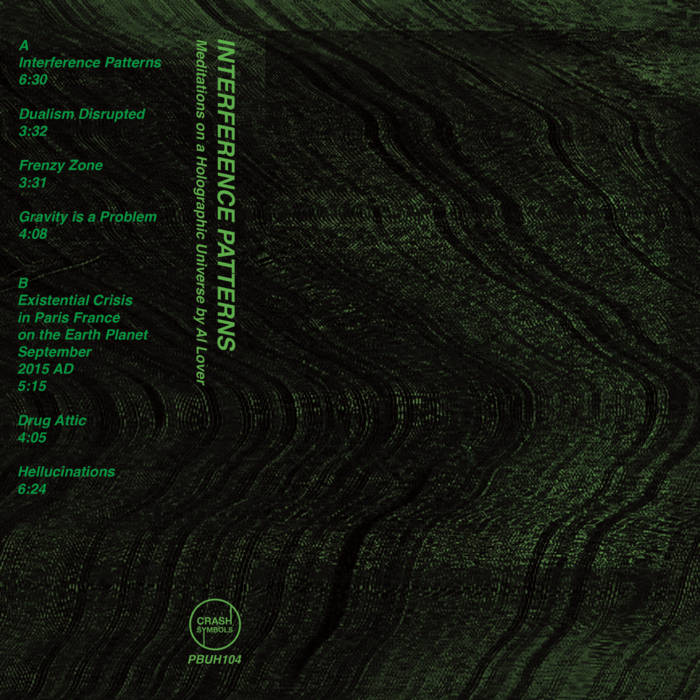 Described by Al as a companion “for bad trips,” Interference Patterns is a sharp turn into a darker vein of the Kraut sounds introduced with last year’s Neuicide! 10” for Fuzz Club (an homage to Neu! and “New York Rockabilly Futurists” Suicide). It also feels ironic in 2017 -- while his first Crash Symbols cassette opened with a track called "How Are Things On Planet Earth?," this one ends with "Hellucinations." Interference Patterns is more cerebral, more hypnotic, more dub, and as it happens made in Paris! With an ensemble of cheap but sympathetic table wines. He cites Rodelius and Moebius, though the outcome here is distinctive, unintentionally reminiscent of the resonance associated with traditional Mongolian urtiin duu, “long songs.” Loping and esoteric, Interference Patterns has a sense of vastness and relentless, generative movement, that conjures a world of acid-soaked then wind-dried electronics. Still, the focus is on finding the self in an infinity of chaos and relativity, moving forward to master the patterns of life in a holographic universe.

"Interference Patterns contains beautifully tortured rhythms, overloaded electric capacitors in need of recapping. The sounds fold into the inner conscious with an effortless ease. Sparse beats keeps Interference Patterns hovering above the ambient wash only dipping in for a refresh of perception." -Lost in a Sea of Sound