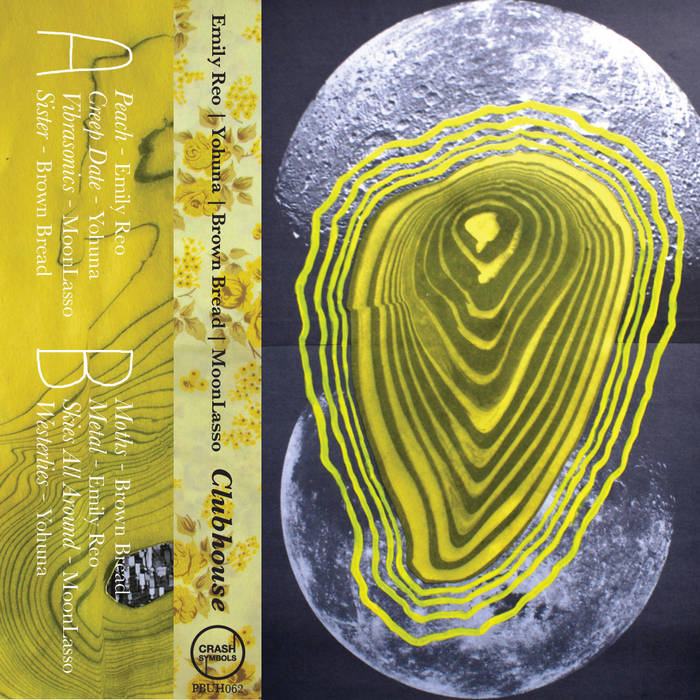 Mine All Mine Records

Mine All Mine Records I love the mix of artists here. It's really awesome to see these voices that differ so much, yet have so much in common. Favorite track: Moths.

Jeremy / HI54LOFI The whole thing is great… but that 'Vibrasonics' track is the one that really slays me. Favorite track: Vibrasonics.

Ben Walker 🚀 I love the vibe of this little tape label, and this one has some great chilled-but-intense tunes on it.

Conceived by Emily Reo, the Clubhouse Split collects songs from four other kindred musicians, enlisting Johanne Swanson, aka Yohuna; Rebecca Doerfer, aka Brown Bread; and Malee Bringardner, aka MoonLasso. Though each is animated by their own unique projects, the inspiration for the split came from a mostly independent discovery and appreciation of each other's music. Each has a unique style and approach, but each of these tracks' orientations line-up somehow.

So, n the spirit of good will and basic arithmetic, the Clubhouse split offers eight songs and four genuine exemplars. If you include the packaging designers, that total raises to six; much thanks to artist Kaley Dickinson and designer Liz Pavlovic for their contributions.

"Each artist on the tape brings a different approach to electronic pop: Yohuna’s contributions are moody and minimal, looping her vocals to sound like a choir of one. MoonLasso brings the most powerful, soul-inflicted vocals (her 'Vibrasonics' has the biggest hook on the split), whereas Brown Bread’s patchwork of sounds brings the most experimental moment on 'Sister'." -Stereogum

"This four-way split tape had a past life as a single album. You can’t convince me otherwise." -Impose Magazine

"Every artist brings something different to this tape, and both sides equally impressed me. It's not often that I encounter music that's so organic, carefully crafted, or self-aware." -The Le Sigh

"...hazy, unique bedroom pop. Clubhouse is such a simple concept, but executed so well that it rises above being just a showcase or sampler of some sort. Clubhouse is eight wonderful tracks of outsider pop, by four distinct artists, all contained in one lovely cassette." -The Creative Intersection

"Whether traditional pop or something more experimental, the result is the same: happiness rules." -Beach Sloth