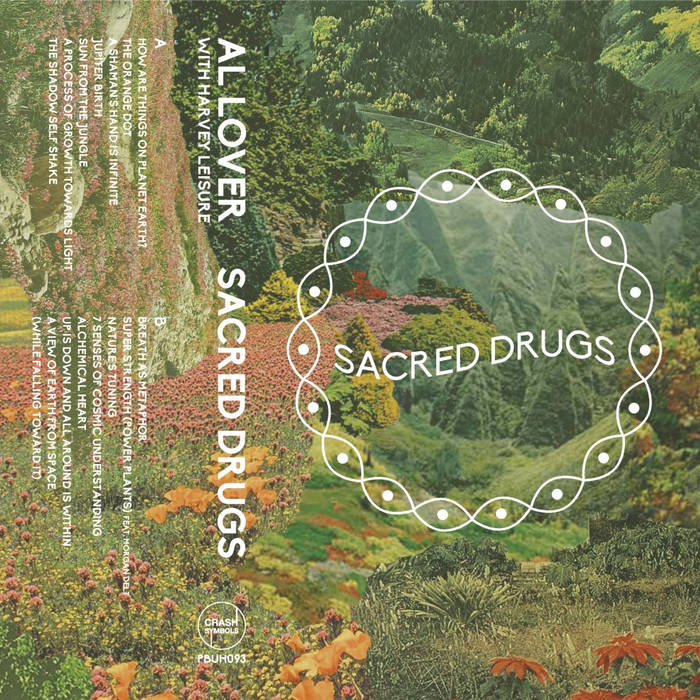 San Francisco-based producer Al Lover has spent the last several years evolving an approach to psychedelic reworks of rock ‘n roll in its various inflections. Though they share some common structures, his solo LP debut Sacred Drugs is a thick distillation compared to older remixes or the heady mixtapes he’s curated for Austin Psych Fest, each its own primer on garage and psych in the corresponding year. Sacred Drugs stands out in Al’s discography, though some of its character and more transcendant qualities are hinted at in his collaborations, with GOAT, and particularly on the single 'Snake Hands' recorded with White Fence. The elaborate treatments on his 2011 digital album Distorted Reverberations (of Reverberating Distortion): Psychedelic Reinterpretations of Contemporary Rock ‘n Roll offer the most obvious antecedant for Sacred Drugs, but clearly as a collection it lacks the same scope.

Listening to Sacred Drugs is as transformative an experience as Al’s own style of composition. Songs are a deliberate associative enterprise, paralleling both the contextualization that takes place as part of any conscious 'hearing' and the abstract notion of self-development. Texture and tone combine to lead the listener inward, with hypnogogic beats that evoke the sense of ritual awakening when it was still a communal undertaking. In that way Sacred Drugs offers a measured take on reality, a tool for perceiving the outlines of your own interconnectedness... like the eponymous entheogens, Sacred Drugs is intended as a companion to self-discovery.

"The record introduces itself in a shimmer of echoing choral washes that seem to call from a distant realm, before a tribal beat lands amidst cyclical percussion, all over laid with a reverberating dub bass. There are hints of early era Floyd, alongside the aforementioned Dilla and Edan, with Goat, the subject of a previous Lover remix, too, thrown into his production cocktail and shaken into oblivion." -The Quietus

"This is what happens when a master of psychedelia finds sacred territory." -The Boston Hassle

"...blends fuzzed-out, psychedelic and reverb-drenched layers with driving rhythms and trance-inducing melodies that could have you staring at the visualizer on your computer's music player all night long." -The Deli Magazine

"Armed with an enviable 45 collection, he’s earned a reputation for repurposing fuzzy rock and roll tracks into celestial soundscapes using tiers of his own distorted beats. With this latest offering, a 14-track epic, he volunteers as your official trip advisor, supplying the perfect soundtrack to your next out-of-body experience, mind expanding journey or midnight drive." -The Bay Bridged

"If fuzzed-out, globetrotting psych is your bag, you're in luck." -Creative Loafing

All songs recorded at Elevated Platforms Studios in San Francisco, CA and Black Out Effectors Warehouse in Asheville, NC in August 2013 to December 2013.

Guests include Kassa Overall and Muriel Grossman, plus an LP of the week by Van Hunt.