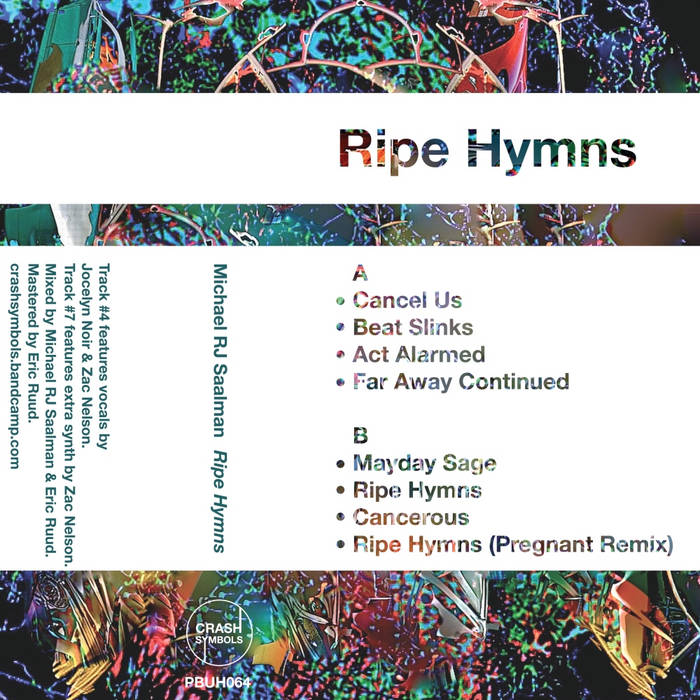 'Ripe Hymns' is the solo debut for Sacramento based experimental producer Michael RJ Saalman, recorded 2011-12 as part of a shift toward more engineered work. Impulsive, often frenetic, it sometimes falls in a recognizable vein but remains uniquely inflected by Saalman's broad influences -- composers like Penderecki or Cassiber, as much as contemporary pop. When the album really resolves itself, the outlook it reveals is engrossing, perhaps best showcased by standouts like "Cancerous" or title track "Ripe Hymns." The album is no less rich thanks to the whimsical beatwork of tracks like "Act Alarmed" or "Far Away Continued," or denser collaged moments throughout, each a joint hinged between more compact emotional narratives. Recorded simultaneously with the debut LP from his Biosexual collaboration with Jocelyn Noir (aka Alak) and Zac Nelson, 'Ripe Hymns' adds further dimension to a unique circle of slipstream pop composers..

"Sacramento-based musician Michael RJ Saalman’s new cassette Ripe Hymns is the kind of minimal, left field electronic music that seems to exist outside genre. Sure, the arpeggio’d synths, tropical percussion, and glitchy electronic feel superficially familiar, but the way in which Saalman layers them is quite unique. An ambient instrumental landscape (save for Jocelyn Noir and Zach Nelson’s haunting vocal harmonies on 'Far Away Continued'), that continually pull the listener into it’s very specific groove." -Symbiotic Reviews

"Sacramento avant-pop auteur Michael RJ Saalman exists in a very insular world. Or at least, it appears that he does. His music is about as detached from any one genre as you can get, and the sounds and rhythms that he creates do not adhere to any known set of musical guidelines. His music seems to be very stream-of-conscious oriented, but not in a fragmented way, more so in a wide-eyed sense of discovery manner – with each instrument willing to give up the ghost in the pursuit of some higher compositional force. Utilizing a host of synths, guitars, and atypical percussion, Saalman creates vivid and intrinsically innovative pop music, but even that description fails to completely capture the often indecipherable way in which he approaches music." -Beats Per Minute