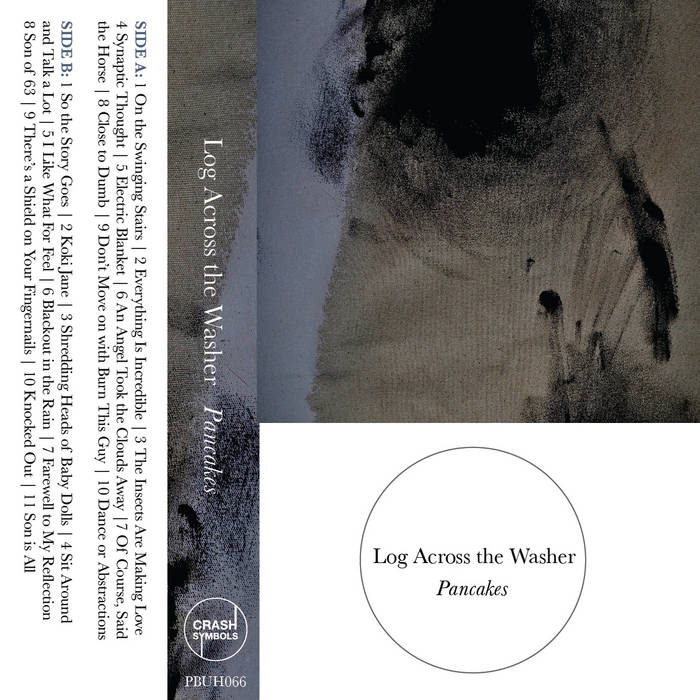 Ted Mills Not exactly my cup of tea, but bound to be somebody else's, others have compared it to Built to Spill, I can hear that. The songs are all very short and everything has that sort of intentional-slightly-out-of-tune torpor. Favorite track: Blackout in the Rain.

Citing the psychically stabilizing effect of sports talk radio and the instrumental mixing on John Coltrane’s Om, Log Across the Washer is the solo project of Portland’s prolific and often amorphous Tyler Keene. Recorded with fewer instrumental tracks and less layered audio, the songs on his latest take on the character of pancakes, spinning tentatively in the air before falling. In 2012, Keene’s album 'Welcome to the Afternoon' was released as what he called a "minimal melodic ode to the textural sounds of 60’s free jazz;" for 'Pancakes,' the melody is more robust and the homage more subtle.

"If through your tender adolescence you were convinced that Doug Martsch wrote some of the most nuanced love songs you'd ever heard, by this point in your life, you'll be begging for Log Across the Washer." -Impose Magazine

"Pancakes invokes a staggeringly offbeat sensation through its prolific genre-bending and tempo-shifting . . . honesty spills out in awkwardness, constant left turns, and unexpected dissonance. It stands pop on its head and finds victory in darkness . . . If pop is and can only ever be commercial, Pancakes resides in a gray area. Keene, it seems, is travelling through this area to not only uphold the merits of pop music outside of commerce, but also its potential to forge honest relationships and experiences through constant shift. This is testament to the length of Pancakes, for it delivers that opposing strain of narrative rock that sells off emotional depth and straightforward instrumentation without losing the reference points of its stories. Only here, you’d better follow the music." -Decoder Magazine

"Releasing an album that weighs in at 20+ tracks is risky business, and usually results in either a fascinating collection of song snippets or an overindulgent mess. Luckily, taking a cue from Guided by Voices’ bag of tricks, Tyler Keene’s psychedelic solo project Log Across the Washer falls under the former category on his new tape, Pancakes, by varying his delivery dramatically over the hour long album, but holding each track together with a vintage jazz vibe (Keene cites John Coltrane as an influence). Though you might be tempted to lump Log Across The Washer in with other current jazz and funk influenced acts like Mac Demarco and Unknown Mortal Orchestra, Keene seems to live in a bubble that prevents him from devoting too much of his attention to imitating a certain artist or scene. Pancakes’ warm production and quirky songcraft keep it timeless, and it’ll certainly hold up in just about any music fan’s cassette collection." -Half-Gift

"Prolific Portland musician Tyler Keene creates lo-fi soundscapes out of waves of distortion, unconventional fretwork, and a twisted sense of pop melodicism . . . often surreal and ramshackle narratives slowly unravel to the point where the songs feel on the verge of breaking apart, but Keene manages to keep the instrumentation together despite its compelling outward movement. Keene has crafted the songs on his latest record, using the titular breakfast staple as inspiration — each song briefly hovers in the air before spinning tentatively to the ground, using that slight free-fall to slowly expand the spaces between the notes." -Beats Per Minute

"There are like a hundred songs on here. The J-card font is miniscule." -Critical Masses