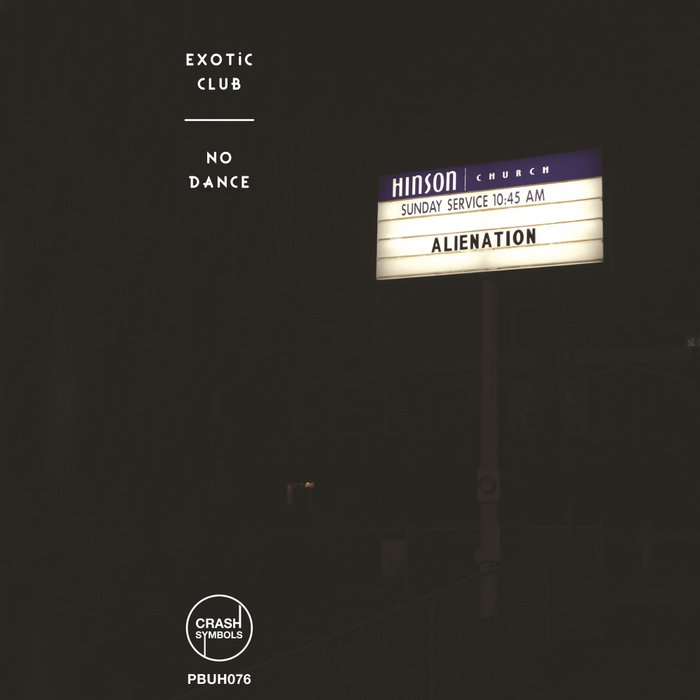 Luke I've been listening this a lot. This is damn good synthpop with some punk influence! Synthpunk?

Exotic Club is a synth-punk project helmed by two Parisians, Remi Boille and Simon Lowzy, splitting their time (not so glamorously) between France and their adopted neighborhood: St. John’s in Portland, OR. 'No Dance' collects their first noisey, tweaking collaborations, recorded while Boille and Lowzy transitioned to part time in America with their first shared basement together. Its five tracks explore the eccentricities of their new environment, particularly the strong current of unconscious alienation that often sets commercial culture apart in contemporary urban spaces. Energetic production and the two’s vibrant delivery elevate the mix from just synth-punk, showcasing a considered approach to their commercial and experimental influences, in addition to a balanced emotional palette – in spite of dramatic vocal interplay and the periodic intrusion of manipulated dancehall effects. Three b-side remixes complete the collection; a moody, chilled out treatment from fellow Portlanders, Coastlands; a driving Roladex edit; and a further treatment from Atlanta’s Matt Weiner (Featureless Ghost, TWINS), who also mastered Exotic Club’s a-side.

"...an intoxicating mix of seemingly mismatched elements. 'Alienation,' clearly visible against a dark night-time sky as backdrop. The album art is a perfect description the music contained within.... it’s dance music for sure, but at the same time the effect of disassociation can not be overlooked... poppy, upbeat dance beats are not just countered, but downright denied. This is, as the title of the album states, no dance album. It’s dance music that is brooding and dark, rather than the vapid instrumentals of the music that typifies a dance club." Quartertonality

"Exotic Club, a French duo now residing in Portland, Orgeon, released its No Dance tape via the prolific Crash Symbols label earlier this week, closing out the darkwave-indebted record with [a] remix from DKA labelhead Matt Weiner (an Atlanta-based producer who more commonly works under the name Twins). On his rework, Weiner refits "Freaks" into a more house-minded template, letting the gurgle of acid-tweaked synths and a ghostly mass of looped vocals ride atop the machine-made shuffle pulsing underneath. " -XLR8R

"Atlanta-based producer Matt Weiner has cultivated quite the spread of mechanized techno and cold wave under only a couple of guises (demented industrial dance music as TWINS and techno-paranoia with Featureless Ghost) and labels (forward-thinking dark wave with his co-run DKA label and throwback techno vibes with his own CGI label), but this is the first time he’s lent his expertise to remix his similarly haunted brethren under his own name. In this light, Weiner has re-imagined source material taken from Paris by way of Portland, OR dark wave duo Exotic Club‘s No Dance, recently issued via Crash Symbols. While the original tune is a bottom-heavy dirge of elusive synth work that balances grim synth punk, basement electronics and stifled energy. Weiner took those same cues and re-purposed them with a Detroit House lens, stripping away any hint of color to make room for long-distance runs of 4-4 immersion. At times devoid of a human element, the rework is a wholly hypnotic drive of propulsive rhythm and bleakness." -Decoder Magazine