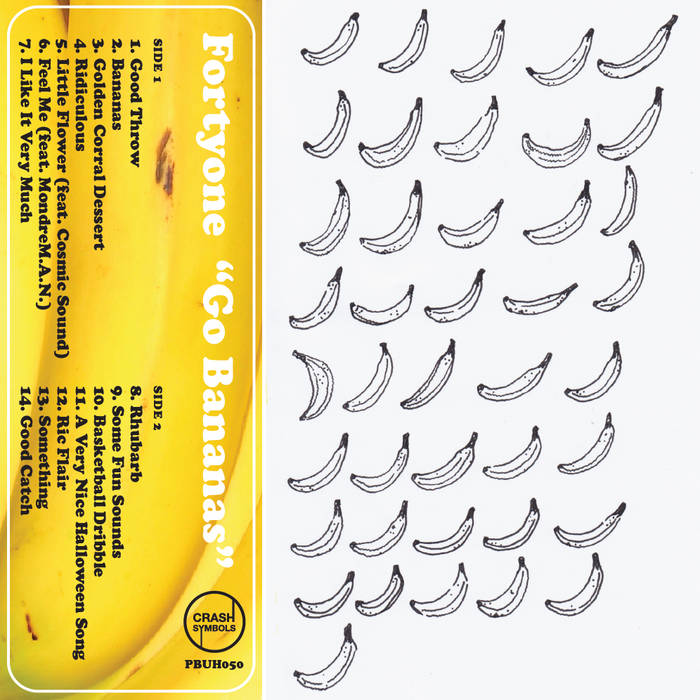 Leo Stableford I think there are a few of us in this world who have experienced a moment where the nonsense piled up to a level where it started to resolve into a new level of reality. That's what it's like to listen to fortyone. Out of the twisted wreckage of loops, hooks, weird samples &c comes a shining palace of insanity that will leave you popping your fingers and shuffling your feet. Favorite track: Rhubarb.

Philip David Morgan Anyone who dare discuss mashup DJs shouldn't forget the mad genius that truly is 41. Just his ability to find common ground between "alternative" and "childrens" fare is an amazing thing. Bandcamp asked me to highlight one track, but Go Bananas is best appreciated in its entirety. Favorite track: I Like It Very Much.

Fortyone is a rigorous, and only incidentally anonymous, composer of aleatoric music. Building sample-based songs in the vein of collage-pop auteur Otis Fodder and the Bran Flakes, he churns through thrift store records and other finds assembling a bank of usable samples. After only a single pass through each haul, he’s collected everything he needs and refuses to revisit individual albums. Among the pratfalls of this process, "...the tracks appear on albums in the order I make them, so I'm often hoping I'll have enough drum, instrument, or vocal samples left for later on in an album. I have to keep this in mind as I make the album, [because] it's never concrete..." Though none of his own compositions take their structure from sampled works, lyrics and repeated themes occasionally seem to cohere into narratives. His current "life’s work" is a Gnostic canon enshrined at 41music.net, mapping his progress toward forty one releases composed according to the "Fortyone process."

'Go Bananas' was drawn from that template, becoming remarkable -- at least from our perspective -- by primarily sampling from Crash Symbols releases. After enthusiastically approving the idea, we sent along links to (you guessed it) forty-one of our previous and upcoming releases, with nearly every Crash Symbols artist at the time represented.

For him the album was very naturally born out of coincidences: "I had just started playing drums, and just happened to have smashed up a crash cymbal pretty good, and re-discovered the HardKnox song "Fire Like This" and its astonishing drum beat... and then I’m put in touch with a label called Crash Symbols and they just happen to send me their Lil' Kids album where I find a "go bananas!" sample when I asked for a total of 41 releases. The theme of going bananas, perhaps on the drums and smashing up a cymbal, could then be an appropriate and a cool image and boom there's a concept and and and... any of this make any sense?”

"The Avalanches and DJ Shadow are two names that come to mind when I think of sample-driven instrumental hip-hop. What if you took their signature palette of vintage vocal interludes, dusty breaks and oddball loops, and took a healthy does of Speed? Well, that would be Fortyone’s Go Bananas . . . Complete with all the sounds you loved from the works of Endtroducing….., Since I Left You and the like, Go Bananas twists and turns with incredible ingenuity. Just as you feel yourself digging deep into one of his funky grooves, Fortyone slaps together an off-kilter transition that changes the pace of the album entirely." -Potholes In My Blog