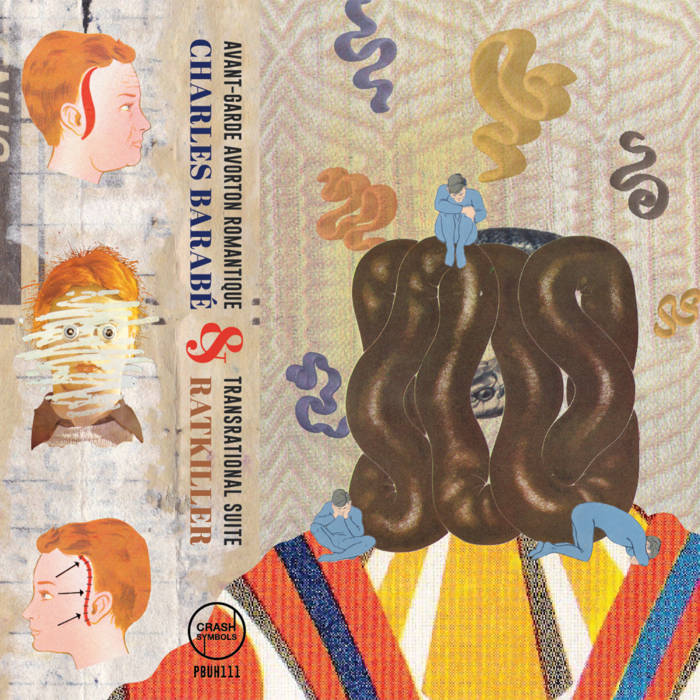 Ted Mills I was just reading about a study that listeners like atonal/12 tone music more if it featured repetition and loops, and this odd release just happens to explore this idea on the A-side. However, the B-side also features a lovely acoustic guitar work near the end that starts sunny then starts to get more twilight and alienating. A solid release for the adventurous.

Canadian experimental composer Charles Barabé's (La Cohu, Orange Milk) new split with Estonia's Ratkiller, aka Mihkel Kleis (Rotifer, Baba Vanga, Porridge Bullet), was orchestrated as a sort of pointillist fantasy. Proposed by Kleis, the angle here was inspired by Barabé's homage to early atonalist Anton Webern. Together the two have made a particularly colorful tape -- a hardware and sample driven jostle between id and super-ego. Weird might be an understatement, though it is ambitious for both. Barabé's tracks are arch and inventive, a futurist's orchestra, while Ratkiller comes more from the gut, mining an expanded toolkit for his response.

"The Charles Barabé and Ratkiller split is fantastically good, which should come as a surprise to literally no one. Charles Barabé is a sound-genius, Ratkiller is a consistent maniac, and Crash Symbols deliver the goods like one of those late-night munchies services that zoom Doritos and blunts to your door at 2:17 AM. Sooooo, the only way this pup was going to let me down would be if was accidentally dubbed over with dreamy bedroom pop or something. But even then, the artwork, with it’s Maurice Sendak having a bad week vibes, would get me by for days.

Channeling the brooding proclivity of dense soundtrack narratives, Chuck reassigns hunks of classical music and it’s kin into beyond epic sagas. As the timpani crashes with anger, reverberating around fever inducing cleaves of sound, you can almost smell gladiators prepping to do something raw and regrettable . . . Where 'Avant​-​Garde Avorton Romantique'glows high-watt neon bulbs, 'Transrational Suite' relies on natural light to show off it’s slow-curved angles. But even with those soft color palettes and deep shag sounds, Ratkiller keeps peculiarity in mind." -Tabs Out Podcast

"Who wins in an arm-wrestling match where both opponents, after struggling to a draw for several moments, suddenly begin to merge at the point of contact, roots sprouting from wrists, branches shooting from fingers, until the combatants fully fuse and become a single, beautiful, flowering tree? The spectators, that’s who!" -Tiny Mix Tapes

"...beautiful and haunting." -Lost in a Sea of Sound

"Come the fuck in or fuck the fuck off." -RateYourMusic User _nkb

Featured sounds by K.Spark and WIZDUMB, plus Basi joins the show to discuss his latest release.